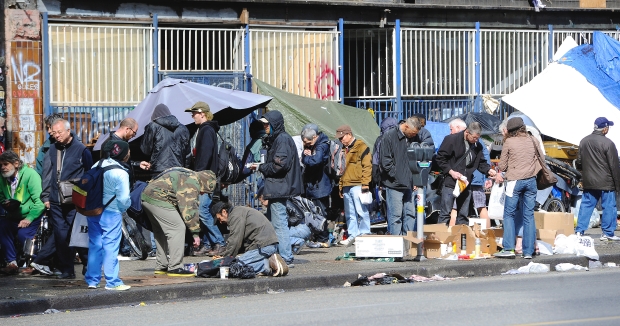 For decades, it’s been the tourist attraction for which the city of Vancouver has been most embarrassed: the infamous Downtown Eastside.

And yet, despite a plethora of academic studies, well-meaning health initiatives, low-income housing options, special police units and a whack of extra funding to underwrite programs designed to help make the place seem less dystopic, the much-maligned neighbourhood is as bad as ever.

While drug use in the area has always been a problem, along with petty crime, it is the number of homeless people with mental illnesses that has become particularly troublesome. A walk along East Hastings Street at almost any time of day would wobble even the most hardened social worker: men and women, of all ages, staggering down sidewalks, screaming obscenities at imaginary enemies, darting into traffic without warning.
Lost souls with psychiatric conditions so severe their chances of survival diminish by the day.

What was once deemed a problem to keep an eye on has, in recent years, become a full-blown epidemic in many North American cities. San Francisco has become Ground Zero in the battle to fight issues of homelessness and those on the street suffering from psychotic disorders. But the growth in this cohort has been noticeable elsewhere in the United States, in metropolises such as Seattle, for instance, a city I visit often.

Last year, an ABC affiliate there produced a documentary entitled Seattle is Dying. It chronicled the city’s mostly futile efforts to combat the rising rates of homelessness, particularly among those suffering from mental illnesses. It highlighted the commensurate increase in crime that has followed.

One case the story brought attention to involved a mentally ill man who tried to throw a woman off a bridge. (He had been arrested three times previously for random attacks on strangers.) Another mentally disturbed man claimed a downtown alleyway as his, threatening anyone who came near with a piece of drainpipe.

Interviews with residents found sympathy and compassion, but also a growing sense of unease about their safety. Their overriding message: Something more needs to be done, even if it means infringing on the rights of those who may be gravely disabled mentally.

And this is not just a big-city issue. Recently, Leonard Krog, the mayor of Nanaimo, B.C., a mid-sized Vancouver Island city of 90,000, issued a plea to higher levels of government to do something about the problem of homeless people on his streets, particularly those with mental illnesses he said are dying because they are unable to care for themselves.

He proposes a solution that, in recent years, has mostly been considered unmentionable: institutionalize those with mental problems so severe that life on the street amounts to a death warrant. He suggests reopening places such as Riverview, the former psychiatric hospital in Greater Vancouver that was phased out over the past several decades, disgorging hundreds of patients onto the streets in the process.

Mr. Krog concedes his option may seem harsh, but the status quo is worse: leaving people to die alone in some alleyway.

He has a point.

We are stuck between two fundamental tenets of a fair and just society: a person’s right to freedom and personal agency, versus the duty authorities have to protect a person from self-harm and any attempts to harm others. If one of those was to trump the other, it would be the government’s responsibility to stop someone from harming oneself or harming others.

Community mental-health teams do the best they can to help those on the street suffering from everything from bipolar disorder to schizophrenia. But they don’t have the resources to help everyone who needs it. And they don’t have the authority to insist those who are most sick get the care they need.
Mental-health services require legal backing to enforce treatment on those who need it but are unwilling to receive it. This is an instance where individual rights should be subservient to society’s obligations to assist those who are not compos mentis.

It may also be time to take a fresh look at institutionalization, which still suffers from the stigma rightly attached to it because of the movie One Flew Over the Cuckoo’s Nest. Many of the techniques used decades ago to sedate, or fundamentally alter a person’s brain chemistry, would never be acceptable now.

Forms of enforced treatment and therapy in a hospital setting could be beneficial, and a more desirable alternative to dying on the street.

See also Tinytowns for the Homeless