Here's what you can do wrong, and the ways they can punish you.
Alexandra Ma, BusinessInsider.com, Oct 29, 2018


China plans to rank all its citizens based on their "social credit" by 2020. People can be rewarded or punished according to their scores. Like private financial credit scores, a person's social scores can move up and down according to their behavior. At the moment the system is piecemeal — some are run by city councils, while others are scored by private tech platforms that hold personal data. Scroll down to see how you can be punished or rewarded.

The Chinese state is setting up a vast ranking system that will monitor the behavior of its enormous population, and rank them all based on their "social credit."

The "social credit system," first announced in 2014, aims to reinforce the idea that "keeping trust is glorious and breaking trust is disgraceful," according to a government document.

The program is due to be fully operational nationwide by 2020, but is being piloted for millions of people across the country already. The scheme will be mandatory.

At the moment the system is piecemeal — some are run by city councils, others are scored by private tech platforms which hold personal data.

Like private credit scores, a person's social score can move up and down depending on their behavior. The exact methodology is a secret — but examples of infractions include bad driving, smoking in non-smoking zones, buying too many video games and posting fake news online.

1. Banning you from flying or getting the train.

China has already started punishing people by restricting their travel.

They can also clamp down on luxury options — three million people are barred from getting business-class train tickets.

The eventual system will punish bad passengers specifically. Potential misdeeds include trying to ride with no ticket, loitering in front of boarding gates, or smoking in no-smoking areas.

This is according to Rachel Botsman, an author who published part of her book on tech security on Wired last year. The exact mechanics aren't clear yet.

According to Foreign Policy, credit systems monitor whether people pay bills on time, much like financial credit trackers — but also ascribe a moral dimension.

3. Banning you, or your kids, from the best schools.

17 people who refused to carry out military service last year were barred from enrolling in higher education, applying for high school, or continuing their studies, Beijing News reported.

In July, a Chinese university denied an incoming student his spot because the student's father had a bad social credit score.

4. Stopping you getting the best jobs.

"Trust-breaking" individuals would also be banned from doing management jobs in state-owned firms and big banks.

Some crimes, like fraud and embezzlement, would also have a big effect on social credit, Botsman reported.

5. Keeping you out of the best hotels.

People who refused military service were also banned from some holidays and hotels — showing that vacation plans are fair game too.

The regime rewards people here as well as punishes them.

People with good scores can speed up travel applications to places like Europe, Botsman said.

An unidentified woman in Beijing also told the BBC in 2015 that she was able to book a hotel without having to pay a cash deposit because she had a good score.

6. Getting your dog taken away.

The eastern Chinese city of Jinan started enforcing a social credit system for dog owners in 2017, whereby pet owners get points deducted if the dog is walked without a leash or causes public disturbances.

Those who lost all their points had their dogs confiscated and had to take a test on regulations required for pet ownership.

Read more: Chinese dog owners are being assigned a social credit score to keep them in check — and it seems to be working

7. Being publicly named as a bad citizen.

Naming and shaming is another tactic available. A a 2016 government notice encourages companies to consult the blacklist before hiring people or giving them contracts.

However, people will be notified by the courts before they are added to the list, and are allowed to appeal against the decision within ten days of receiving the notification.

It's not clear when the list will start to be implemented.

A prototype blacklist already exists, and has been used to punish people.

The scrolling list on the left shows individual's names alongside partially redacted ID numbers, while the one on the right shows company names.

Li Xiaolin, a lawyer who was placed on the list in 2015, found himself unable to purchase plane tickets home while on a work trip, Human Rights Watch reported. He also couldn't apply for credit cards.

This video, posted by freelance journalist James O'Malley, shows an announcement on a bullet train from Beijing to Shanghai warning people not to misbehave — or else their "behavior will be recorded in individual credit information system." 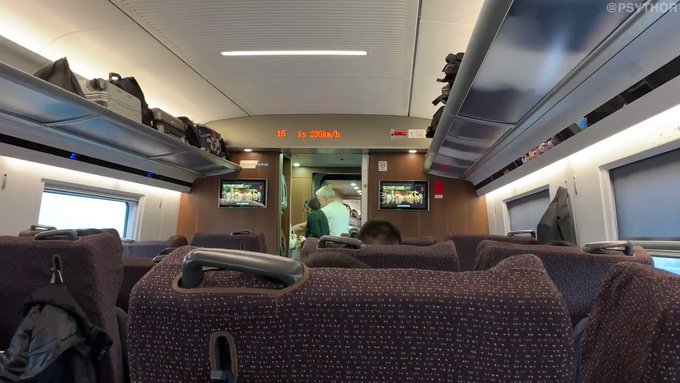 Here's a dystopian vision of the future: A real announcement I recorded on the Beijing-Shanghai bullet train. (I've subtitled it so you can watch in silence.)

Read more: A creepy video shows how China warns its citizens to behave or get punished by its nationwide social credit system

There is also a list for good citizens — that will reportedly get you more matches on dating websites.

The BBC said that Baihe, China's biggest dating site, is boosting the profiles of good citizens.

They can also get discounts on energy bills, rent things without deposits, and get better interest rates at banks.

These perks were available to people in Rongcheng, eastern China, whose city council rolled out a social credit system for its citizens and was profiled by Foreign Policy.

Despite the creepiness of the system — Human Rights Watch called it "chilling," while Botsman called it "a futuristic vision of Big Brother out of control" — some citizens say it's making them better people already.

A 32-year-old entrepreneur, who only gave his name as Chen, told Foreign Policy: "I feel like in the past six months, people's behaviour has gotten better and better.

"For example, when we drive, now we always stop in front of crosswalks. If you don't stop, you will lose your points.

"At first, we just worried about losing points, but now we got used to it."